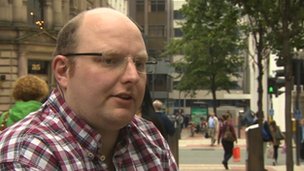 Doug Paulley was awarded £5,500 in compensation

A disabled man has won a legal ruling against a bus company over its wheelchair policy.

Doug Paulley from Wetherby, West Yorkshire, took First Bus Group to court after he was told he could not get on a bus because a pushchair user refused to give up the space.

A judge at Leeds County Court ruled the “first come first served” policy was unlawful discrimination in breach of the Equality Act 2010 .

First said it was “disappointed”.

Mr Paulley, 35, told BBC Look North: “Somebody with a pushchair in the wheelchair space refused to move when asked by the driver, because their baby was asleep in the pushchair and they didn’t want to wake the baby up.

“So I was unable to get on the bus, I was told to get off the bus and wait for the next one.

“Having approached them directly in various other ways, this seemed the only way to force them to take the issue seriously and to make adjustments so wheelchair users can reliably take the bus.”

‘Breakthrough’First’s website states: “Wheelchair users have priority use of the wheelchair space”, but adds that “the driver has no power to compel passengers to move in this way and is reliant upon the goodwill of the passengers concerned” and “if a fellow passenger refuses to move [the wheelchair user] will need to wait for the next bus”.

Mr Paulley’s lawyer Chris Fry from Unity Law said his client was awarded £5,500 in compensation and the company had been given six months to change its policy.

“This is a breakthrough. There’s no point having an accessible bus if the service itself is inaccessible,” Mr Fry said.

In a statement, First Bus Group said it would “take time to consider the findings”.

It added: “At First we do recognise how important it is that bus services are accessible to all and our drivers across the country are trained to act in accordance with the law in this area.”

Disability campaigner Baroness Tanni Grey-Thompson said: “For millions of disabled people looking to travel to work, the shops or hospital visits public transport is our lifeline.

“The decision in Doug’s case will drive the changes that are needed to make public transport accessible for all disabled users.”